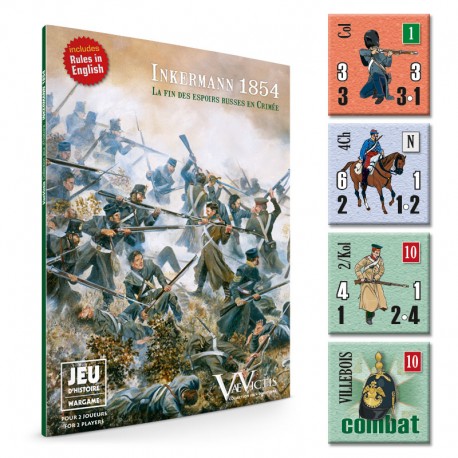 The battle of Inkerman was fought on 5th November 1854 between French and English Forces on one side, and the Russian army in the other side. The objectif for Russians was to break the siege of Sebastopol in order to take control of Crimea...

The battle of Inkerman - 5th November 1854
The Crimean War was the result of the conflicting ambitions of three great European powers: Russia, at war with the Ottoman Empire, pushed its pawns into the Balkans and dreamed of seizing  Constantinople; England needed a military success to affirm its predominance in European balance of power; and France, under Napoleon III, hoped to erase the Treaty of Vienna with a victory over Russia.
For want of a better alternative, the British, French and their Turkish allies set the city Sebastopol as their strategic objective in the hopes of then “neutralising” the Black Sea.  After arriving in Crimea and pushing the Russians at Alma, the Anglo-French forces of Lord Raglan and Marshal Canrobert found themselves engaged in a siege of the city beginning in October 1854.
To attempt to unblock the situation and break the siege, the Russian admiral Menchikov ordered a counter-attack, with 35,000 men, to take control of the Inkerman heights that dominated the British camp.  His plan consisted of striking the two British divisions of Raglan by surprise, the latter isolated from the French against whom he organised a diversion.
The battle of Inkerman was carried out on especially damaged terrain.The Russian attack, in three columns, did not prove decisive.  Amid indescribable chaos, the British kept their wits about them and maintained their positions. A charge of Algerian zouaves and infantrymen, brought in as reinforcements by the French, finally pushed Menchikov’s troops back, forcing them to withdraw to Sebastopol: “never before was there such a combat in which small groups of twenty, ten people, or even just one displayed greater boldness or obtained more surprising results” (John Fortescue, History of the English Army).
Will you be able to organise and command the Russian troops in a surprise attack on the British positions?
Will you be able to gather and hold sufficient reinforcements to ensure the success of the Anglo-French expeditionary corps?