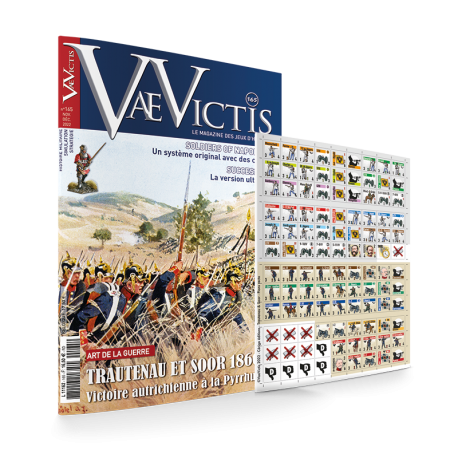 End of June 1866. After several months of growing tensions, war broke out between Austria and Prussia for control of the primacy in Germany. Prussia plans to take its troops through the Sudetenland and into Bohemia through four different passes, with the goal of facing the Austrian main army in a decisive Napoleonic battle.
The end of one of these passages is located here, near the town of Trautenau. On June 27, the 10th Austrian corps pushed back the 1st Prussian corps there. But this tactical victory, the only one for Austria in Bohemia, obtained at the cost of heavy losses will have no strategic consequences: the next day, the 10th Corps is swept away by the Prussian Guard during the Battle of Soor.
New module in the series "Battles in the time of Napoleon III", Trautenau-Soor is the second game in a series that will cover the main clashes of the Bohemian campaign of 1866 and will conclude with the battle of Sadowa (or Könnigrätz). Players will have the opportunity to chain battles in a campaign mode and end up, perhaps, in a very different situation during the decisive confrontation of July 3, 1866.
Using the series "The Great Battles of Napoleon III" (VaeVictis n° 55, n° 73, 138 and 157), the system is simple and dynamic, emphasizing the engagement of troops in the face of deadly defensive fire.
Scenarios by Arnold Giraud-Moser on a system by Luc Olivier.