> Wargames>The Lion and the Sword (ziplock) 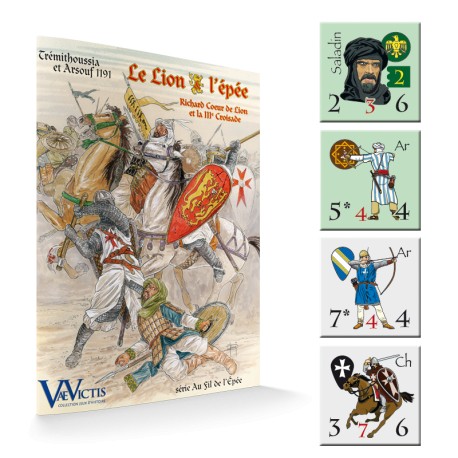 The Lion and the Sword (ziplock)

Tremithousa and Arsuf 1191 are the 31 st and 32nd battles of the series Au fif de l'epee / By the Edge of the Sword, launched in issue 26 of the magazine VaeVictis. The game includes two battles won by Richard the lionheart during the course of the Third Crusade, the first battle being fought on Cyprus against Isaac Comnenus and the second in the Holy Land against Saladin.

On his way to the Holy Land, Richard Coeur de lion (the lion heart) arrived at Cyprus. The ruler of the island, Isaac Dukas Comnenus, tried unsuccessfully to repel the Crusaders' landing before falling back to Nicosia to regroup his forces. Once assured of the safety of his fleet, Richard set off into the interior of the island.
Isaac marched against him, hoping to confront him in a vast plain favorable to the maneuvers of the redoubtable Byzantine cavalry. The clash occurred near the village of Tremithousa on May 21, 1191.
The cavalry charges were horrendous and for a time the issue was in doubt, but the Anglo-Normans' heavy knights finally prevailed. Isaac was captured, and this caused the Greeks to rout. Richard, now in control of Cyprus, could resume his journey to the Holy Land.
He joined Philip Augustus at Saint Jean d'Acre, which fell on July 12. When Philip returned to France, Richard gained sole command of the Crusader army. He marched south with the intention of liberating Jerusalem, but on September 7, 1191, Saladin attacked the Christians as they made their way down the coast.
Showered with arrows, the Hospitaliers launched a premature charge, forcing Richard to give the signal for a general attack. After a violent counterattack, Saladin's troops were finally vanquished by one last charge of the Crusaders. Richard the lion heart soon reconquered the coastlands, after which he negotiated an agreement with Saladin which allowed pilgrims free access to Jerusalem.

The Lion & the Sword includes two 59 x 40 cm maps (one sheet backprinted), 216 double-sided die-cut counters and markers, and a rules and scenarios booklet and player-aid card in calor.