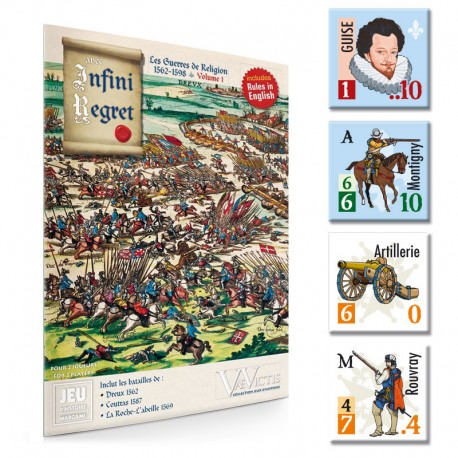 As the first pitched battle of the French Wars of Religion, Dreux began with an enthusiastic charge by Coligny’s cavalry. All the Royalist infantry, except the Swiss, was put in disorder. The attacks and counter-attacks would continue until Guise and Saint-André’s troops, passive until that point, overwhelmed the Huguenots. At the end of the day, almost all the commanders of the two camps were killed or taken prisoner. Despite the Protestant rout, the war would continue for a long time!

After the assassination of the Prince of Condé at Jarnac during the third French War of Religion, Coligny regrouped the Protestant forces near the Vienne. He managed to surprise the Duke of Anjou, who had set off in pursuit of him, despite his strong defensive position. At dawn, Coligny’s avant-garde progressed through hedges and thickets. The Royalist infantry, knocked about by the Protestant cavaliers, was beaten and their commander, Filippo Strozzi, taken prisoner. This victory would be a limited and fleeting one.

The eighth and final French War of Religion began with the first battle of Henri of Navarre as commander in chief. Faced with the Royalist troops commanded by the Duke of Joyeuse, “Premier mignon du Roy”, Navarre took advantage of the night to position his troops near Coutras. At ten o’clock, the charge of the Royalist gendarmes hit the first line of Huguenot cavalry despite the deadly fire of the artillery commanded by Sully. But the counter-charge of Navarre, Condé and Soissons shifted the course of the battle and destroyed the morale of Joyeuse’s troops. The ensuing massacre caused the deaths of Joyeuse, his brother, and numerous other noblemen.