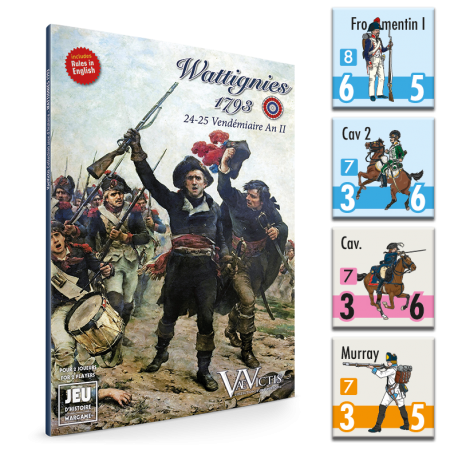 At the end of summer 1793, the French thwarted the English Army’s attempted siege of Dunkerque by their victory at Hondschoote on their Hanoverian allies. This setback did not disrupt the Prince of Coburg’s plans. With the Austrian Army, he lay siege to Maubeuge, one of the last citadels protecting the border from northern France.

Despite its strong garrison of  20 000 men, Maubeuge could not hold out for long. Consequently, Jean-Baptiste Jourdan, the new commander of the Army of the North, spurred on by Lazare Carnot, prominent war minister for the Committee of Public Safety, quickly assembled his troops to clear the area.
So on 24-25 Vendémiaire an II (15-16 octobre 1793), 45 000 Frenchmen launched an attack on the fortified Austrian positions located on the heights south of Maubeuge, at the level of the villages of Dourlers and Wattignies.
The first day, despite the astounding resources deployed, the somewhat disjointed attacks of the French were unsuccessful.During the night, Carnot and Jourdan reconsidered their plans and decided to concentrate their efforts on their right wing, toward the village of Wattignies, whose seizure would force the Austrians to retreat. To accomplish this, they transferred 6 000 hommes from the centre to their right wing.
The offensive movement of the morning of 25 Vendémiaire was fortunately concealed by fog and the French, under Lazare Carnot’s drive, finally succeeded, not without difficulty, in seizing Wattignies. The Prince of Coburg feared for the survival of his army and prudently ordered their retreat as the French commanders had expected. The siege of Maubeuge was lifted and the Coalition was once again defeated by the troops of the young French Republic.

Later, Napoleon would describe the battle of Wattignies as “the Revolution’s most beautiful feat of arms”.