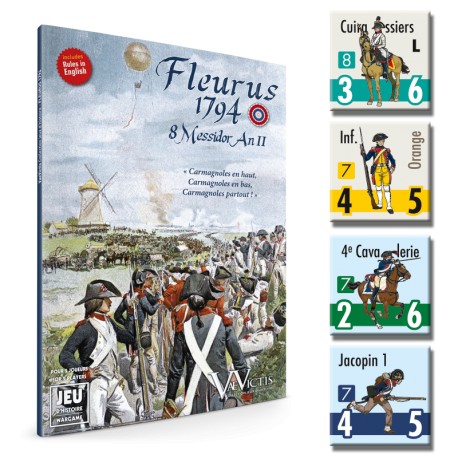 Fleurus 1794 is a wargame from the series "les batailles de la Revolution" (Battles of the French Revolutionary wars), by Matthieu Dangla.
It covers the battle of Fleurus, between the French army of General Jourdan and a Coalition force lead by Saxe-Cobourg.

The game is included in running subscription and will release end of December.

Fleurus : This name resonates throughout history, alongside Valmy, as one of the most important victories of the French Revolution against the Coalition Army.
In 1794, the war had been going on for two years without either side winning a decisive result. Pitt and Coburg had not lost hope for a military victory over the French Revolution. At the beginning of 1794, the Prince of Coburg decided to concentrate his effort on the north of France in view of a march on Paris that would put an end to the war. To confront this danger, Lazare Carnot, “the Organiser of Victory”, responded by  concentrating forces on Charleroi, in Belgium, in order to threaten the Austrian lines of communication and thereby compel Cobourg to withdraw.
The Battle of Fleurus took place under these circumstances with 75,000 Frenchmen facing off against 50,000 Coalition soldiers (mostly Austrians and Dutch). The battle was particularly unrelenting and lasted the entire day of 26 June 1794. The beginning of the battle was favourable to the Austrians; their first assaults forced the French to withdraw and at times caused them to rout.
But the “Soldiers of An II”, under the command of generals like Jourdan, Kléber, Marceau, Lefebvre and Soult, held strong and reformed a battle line. In the afternoon, the assaults by the Austrian columns smashed against these French positions.
Above the battlefield, an aerostat was deployed for the first time and allowed the French army to gather information on the Coalition’s movements. It was too much for the enemy soldiers: “Carmagnoles above, Carmagnoles below, Carmagnoles everywhere!”.
Finally, the Prince of Cobourg ordered the retreat. Soon, Belgium would be lost to the Emperor of Austria. After Fleurus, the risk of a military defeat of the French Revolution would be warded off for a long time.