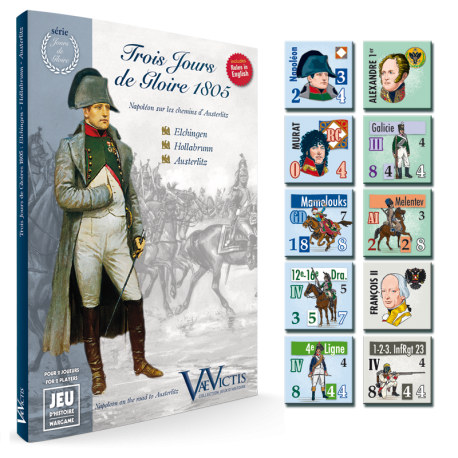 Trois Jours de Gloire 1805 (Three Days of Glory 1805) combines three battles of the German and Austrian campaigns of 1805, already published in the Jours de Gloire (Days of Glory) series, in a revised and redesigned edition: Elchingen, Hollabrunn, Austerlitz.
Note : this wargame is a special issue not included in subscriptions.

In Elchingen (14 October 1805), Marshal Ney’s VI corps attacks Riesch’s isolated Austrian corps. The combats between the two adversaires with comparable strengths culminates with the seizure of Elchingen Abbey. Ney’s dazzling victory at Elchingen also seals the fate of the principal Austrian army, entrenched at Ulm, that will surrender a few days later.  (1st edition: Canons en Carton, 2004)
Hollabrunn (16 November 1805) is a chaotic engagement between the advance guard of the Grande Armée commanded by Murat and the Koutousov’s rear guard that withdraws north of the Danube. Although outnumbered, Bagration manages to organise a skilful and effective defence of his positions and slow the progression of the French. (1st edition : Canons en Cartons, 2005).
Austerlitz (2 December 1805) is justifiably considered Napoleon’s most spectacular victory. The battle regroups three emperors and 150.000 combattants. The Austro-Russian army is sure of its victory and falls into Napoleon’s trap resulting in a complete and decisive defeat (1st edition : VaeVictis n°58 and 64, 2004-2005).

Trois Jours de Gloire 1805 offers players various situations and battles of different scopes. By commanding several divisions or several army corps, the nature of the decisions to be made changes and the games take on another dimension.
Will you have Ney’s offensive energy at Elchingen ? Will you manage to hold on to the terrain like Bagration at Hollabrunn ? Taking the challenge to the next level, will you be capable of reproducing Napoleon’s masterpiece at Austerlitz through your own battle plan?

Trois Jours de Gloire 1805 also offers scenarios specifically adapted to the competition for Elchingen and Hollabrunn and two different modes of play for Austerlitz (activations managed at the division level or the army corps level).