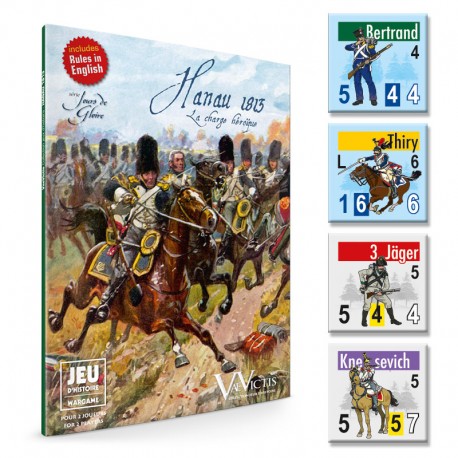 Hanau 1813 is a game in the Jours de Gloire series.  It covers the battles that took place around Hanau on 30 and 31 October 1813 to open the route to Mainz for the Grande Armée as they retreated to France.

After the defeat in Leipzig, the emperor planned to regroup his army in France to regain their strength and continue the combat.  The situation was dramatic: the Confederation of the Rhine no longer existed, the Grande Armée was an army of conscripts, aside from a few exceptions, and the marshals and generals that had commanded during this campaign had all been defeated.

The town of Hanau was located on the route that led the French to their depots in Mainz.  General Wrede, former ally of the French, deployed an Austro-Bavarian corps of around 50,000 men in this town with the aim of blocking Napoleon’s retreat route.  On 30 October, with fewer than 25,000 men, the vanguard of the French army arrived.  After a terrible artillery duel, Napoleon attacked the enemy positions.  The charge of the cavaliers of the Imperial Guard was finally decisive and Wrede was forced to retreat, even though his troops still occupied Hanau.

Following this victory for Napoleon, Marmont arrived during the night with the 3rd and 4th corps and seized the village early in the morning.  On 31 October, battles broke out between the Austro-Bavarians, seeking to take back Hanau, and the troops of General Bertrand, who was in charge of the rearguard of the Grande Armée.  The battle raged all day long; Wrede was wounded and his troops were pushed back and withdrew.  Bertrand and the last French soldiers withdrew as well.  The battles of Hanau were finished.

The game Hanau 1813 confronts players with numerous dilemmas.  Will the French player succeed in getting out of the trap set by the Austro-Bavarian army?

Should Napoleon throw the Imperial Guard into the battle?

Will the Austro-Bavarian player manage to prevent the Grande Armée from reaching France?

Does Wrede have the means necessary to defeat the elite cavalry of his adversary?