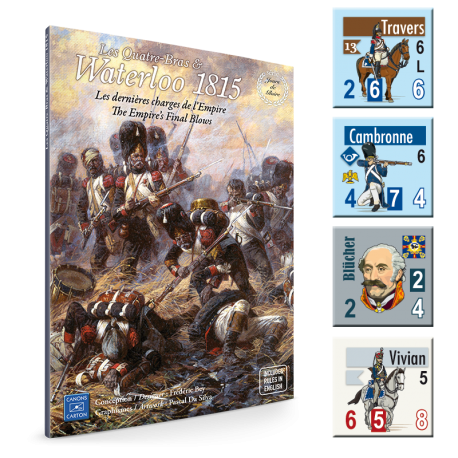 Les Quatre-Bras and Waterloo 1815 is a complete game in the Jours de Gloire series. It covers the battles which were fought on June 16 and June 18, 1815, during the Emperor Napoléon’s offensive in Belgium.
This second edition of the game uses Jours de Gloire Series Rules, 2021 Version.

Contemporary history has not effaced the legend of Waterloo—it has increased it tenfold. The drama which was played out in Belgium, when Napoléon chose to take his destiny into his own hands one last time and attack Wellington’s Anglo-Allied troops and Blücher’s Prussian army, has been recounted hundreds of times by historians. It has also inspired poets and philosophers, and more recently movies have also seized upon the Battle of Waterloo and brought it to life.
As to the events, they were glorious and dramatic: on the morning of June 16, Ney found the crossroads of Les Quatre-Bras in front of him solidly occupied by the advance guard of Wellington’s army. At 1400, he launched his attack. All afternoon the battle raged. Losses were heavy on both sides. At the end of the day, the men collapsed from exhaustion and the fighting ended indecisively. On that same day, Napoléon defeated the Prussians at Ligny.
Two days later, Napoléon found himself facing Wellington south of Waterloo. The two armies each consisted of about 70,000 men. Napoléon’s plan was simple: to make an attack against the center of the English line after having fixed its wings in place. But matters did not play out as he expected. The farm of Hougoumont repelled all assaults, the I Corps’ attack was brought to an abrupt halt and Ney’s foolhardy cavalry charges failed to push back the enemy. Soon the Prussians appeared on the French right. Napoléon then had to direct a defensive battle. The Guard attacked one last time and was repulsed, and that was the end: the grand Napoléonic epoch was dead by the evening of June 18, 1815, on the plain of Waterloo.
As a legacy of this legendary battle, let us accept the invitation of Commandant Lachouque: «Pilgrim to Waterloo, pause for a few moments at La Belle-Alliance, in front of the eagle with broken wings, the place where Napoléon saw his star sink below the horizon. Gaze on the crests of Mont-Saint-Jean, on Hougoumont, on the valley of La Haye-Sainte. Consider those who have been sleeping there since the day of that fight to the death. Then you will understand that a European drama occurred here. Here the curtain was lowered on the final act of the drama that began on June 2, 1812, when the Grande Armée crossed the Niemen.»
Les Quatre-Bras and Waterloo 1815 are battles which pose numerous challenges for the players: assaulting fortified farms, launching cavalry charges, organizing grand batteries of artillery, handling reserves and using reinforcements decisively. Will Napoléon succeed in discovering the flaw in the English defensive system? Will Wellington have the courage to hold his line in the face of the best army in the world? Will Blücher arrive in time to decide the fate of the day?