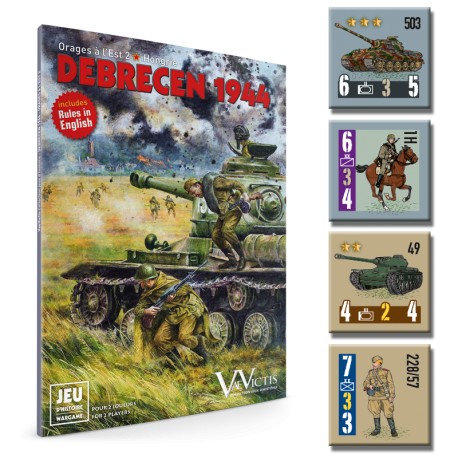 A game by Nicolas Stratigos, VaeVictis jeux d'histoire series
The battle of Debrecen took place after the battle of Turda, published in Storms in the East.

Following the combats around Turda in September 1944, Malinovsky receives the order from Stavka to attack in the direction of Budapest.
To do this, he assembles a great force, albeit slightly weakened by previous combat: Pliev and Gorshkov’s mobile groups, 6th Armoured Guards Army and 53rd Army with a tank corps… on the other side, Third Panzer Korps with three armoured divisions and a Panzer Grenadier division supported by some Hungarian and German troops. All told, more than 1000 tanks will face off over the course of three weeks and on a front of nearly 140 km!
On 6 October 1944 the southern pincer of the 2nd Ukrainian Front attacks the forces of Army Group South around Arad and breaks the 3rd Hungarian Army. In 24 hours, the spearhead of the attack, the Cavalry Mechanized Group under Pliev, advances more than 50 km. The northern pincer – 6th Armoured Guards Army – throws itself full force against the counter attacks of the 1st and 23rd Panzer around Nagyvarad and cannot break through to the Hungarian plain.
Redirecting Pliev’s group toward the northeast, Malinovski hopes to make a pincer attack on Nagyvarad’s defenders and open up the route toward Debrecen,  Nyíregyháza and Tokaj, cut Army Group South in two and isolate the 8th Army, retreating before the 4th Ukrainian Front.
On 9 October the southwestern barrier of Debrecen falls but the Germans engage reinforcements and launch two divisions, a Panzer and a Panzer Grenadier division, supported by a Tiger II battalion  – Operation Zigeuner Baron – at the flank of the Soviet penetration on 19 October.
Debrecen finally falls on 20 October, Nyíregyháza the 22nd, thereby isolating the 8th Army…
Is it all over ? No – taking advantage of the advanced position of Pliev’s cavalry corps, the Germans launch an assault with the units of the 8th Army and the Panzer in order to reopen the Soviet trap and destroy the mobile group.
As the Soviet, will you be able to best use your powerful armoured forces to surround the enemy, and as a member of the Axis can you save the 8th Army and protect the outskirts of Budapest ?