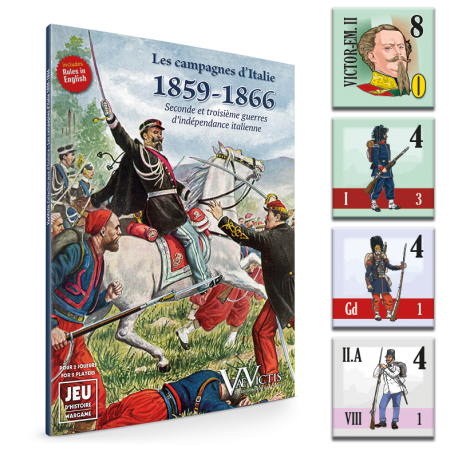 Evolution of The Marshals series for the campaigns of the 2nd Empire.
Volume II of the Gaiter Button series

1859. This is the story of the other — the nephew, the other French emperor, the other Napoleon for the other Italian campaign. Even if the names and places are similar, the events are quite different.
This campaign of 1859 is not the campaign of 1796 or even 1800. The revolutionary tide has passed, and the military movement no longer has the same epic sense. Nevertheless, a king has a responsibility to respond to the call of his people to rid them of the Austrian yoke and lead them to independence and unity. This king found the man who could support him against this formidable adversary; a man with an illustrious name, at the head of a powerful nation with a legendary army.
Everything plays out in Po Valley, from Turin to Verona by way of Milan, with no less than an imperial invasion to push back. They will have to cross waterways like so many hedges standing between them and freedom. They must be victorious in the bloody combats of Magenta and Solferino … Unless the Empire counter-attacks to save the Kingdom of Lombardy-Venetia.
1866 is the story of a young nation searching for its identity and seeking to take back the last part of its territory from despised Austria. However, this nation has not yet come to terms with its recent unification and will struggle against a tough adversary. The austrian army will achieve it’s greatest exploit of 1866, nevertheless so contrary to victory by force of arms.
VaeVictis invites you to experience these two campaigns with the  Gaiter Button system,  inspired by the Marshals. Incorporating feedback from the previous volume on 1870, the system offers improved fluidity while still perfectly simulating the European operation art of the middle of the 19th century.