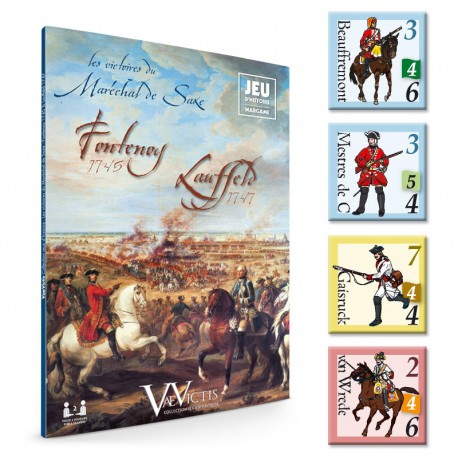 Two victories of the Marshal de Saxe : Fontenoy 1745 and Lauffeld 1747.A game by Nicolas Stratigos

From 1745 to 1747, during the War of Austrian Succession, Maurice de Saxe won three great victories against the allied army known as the “Pragmatic Army”.

On May 11, 1745 at Fontenoy, after a brilliant manoeuvre, he drives the British-Dutch army, commanded by the Duke of Cumberland, to confront him on the terrain of his choosing.  Following furious fighting where the French army, under the eyes of the King, struggles but does not fall, the Pragmatic Army retreats, leaving behind thousands of fallen men.

On October 11, 1746, at Rocoux on the uplands of Liège, the Marshal de Saxe defeats the allied army led by Charles-Alexandre de Lorraine.

And finally on July 2, 1747, at the battle of Lauffeld near Maastricht, the French army attacks and is victorious from a position diametrically opposed to that of Fontenoy.

Following fierce battles around the village of Lauffeld, the allied army, once again commanded by the Duke of Cumberland, owes its salvation to the sacrifice of the British cavalry.

With The Victories of the Marshal de Saxe, relive the Lace Wars and

replay in an evening the battles of Fontenoy and Lauffeld.

The Victories of the Marshal de Saxe includes :