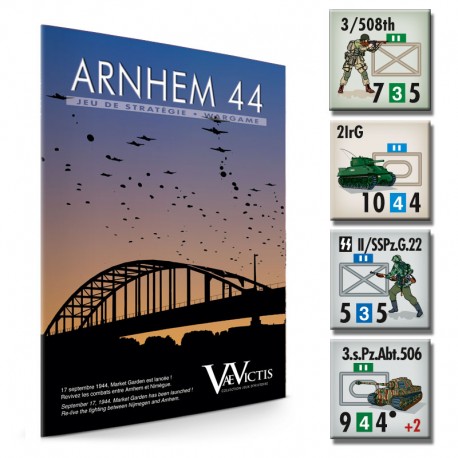 Arnhem 1944 simulates the combats of the 1st British Airborne and 82nd US Airborne divisions to capture the bridges at Nijemegen and Arnhem. This game is a second and greatly re- vised version of the game previously published under the same name in VaeVictis 13.

September 17, 1944. The tirst parachutists drop on to Nijmegen and Arnhem! Operation Market Garden has been launched in the hope of smashing a defeated enemy and ending the war before Christmas. However, the Germans still have some fight in them and, unfortunately for the Allies, they have the means: two SS Divisions, the Frundsberg and the Hohenstaufen, are in the sector. In a few hours, these men hait the Allied ad vance with the help of ail that the Wehrmacht has left in the Netherlands.
Vae Vietis wants you to re-live the fighting between Nijmegan and Arnhem which saw German troops in Holland take on the parachutists of the British 1 sI Airborne and American 82nd Airborne divisions, as weil as the forces of the XXXlh British Corps.